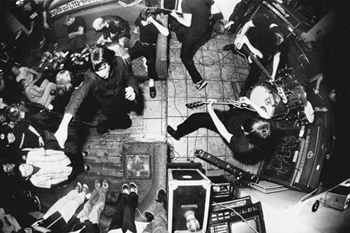 When Refused released their epic “The Shape of Punk to Come” in ’98, I was just a stupid kid too strung out on adolescent pop-punk to care. Back then, Refused was that odd, raven-haired band on Epitaph Records compilations, whose songs were sonically assaulting and unapologetically political (and, now that I’ve learned a few things, brazenly anarchist). The New Noise that Refused offered did little to satisfy my then-insatiable appetite for songs about girls and breaking up.

So it was with little surprise that Refused’s sociopolitical content went completely over my head, as did their unique brand of hardcore. Yet I knew, while scanning the booklet of Punk-O-Rama 4, that my taste in rock music and the bombast of such tracks as “Worms of the Earth/Faculties of the Skull” and “Tannhauser/Derive” would some day intersect. Eventually, their lyrics would strike a chord. Eventually, the Drop-D guitar chaos would cause my ears to perk up. Eventually, the band’s general on-stage bravado would elicit under-my-breath mutterings of “This is the raddest band I’ve ever seen.”

And I was 100 percent correct.

When the pangs of Resistance (read: procrastination, apathy, anxiety, etc.) creep up, I’m typically steered toward YouTube to watch bootleg Refused concert footage or the band’s official break-up documentary “Refused are Fucking Dead” for the umpteenth time. There is one video that intrigues me most out of all the others. In it, the band is tucked into the corner of a dive bar in Ireland somewhere, playing to a handful of listeners. In front of lead singer, Dennis Lyxzen, is a booth with a few buzzed drinkers paying little attention to the pummeling noise behind them.

Now, here is a band set to release what will eventually become a pivotal record in punk/rock, playing in a shitty bar and still rocking out with the same passion and energy that became their trademark. Viewing it now, it appears that this show was beneath the band*, yet one can’t sense as much from their performance. Perhaps they hid their displeasure well. Or maybe they saw on opportunity, as meager as it may have seemed, to blow an audience away with the New Noise. Based on the acclaim that follows Refused today, some 12 years after their split, I’d say it’s most certainly the latter.

* It should be noted that Refused’s last official show was in a random Virginia basement. Something tells me they didn’t much care where they were playing, just so long as they were.

Remember, every show – whether it’s an opening slot, an open mic or busking on the street – counts. Many times I’ve nearly talked myself out of playing at some random venue because I was sure it would lead to nothing. Yet I can tell you that those very nights when I reluctantly got off my ass, stashed my acoustic in the trunk and drove off to an open stage were some of most memorable. It was then that I had the best performances, received lots of positive feedback, handed out a pile of CDs and spent the rest of the night connecting with other musicians. That’s the kind of reward that makes battling the Resistance a welcomed challenge and, in turn, opens the door to future opportunities.